This is my sixth EU Referendum post (for the previous five, check out here and follow links). I am aware, I have yet to categorically state my voting intentions for the EU Referendum on June 23rd along with reasons, as I promised I would, so please bear with me. 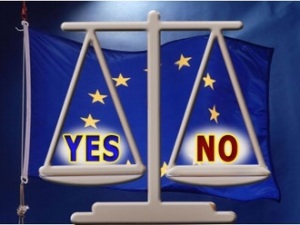 The main reason is there is so much information and opinion to sift through and, unlike Marvin the paranoid android, I do not have the brain the size of a planet to sift through it all. This is not helped by disingenuous rhetoric from both remain and leave camps. I do reckon, with due respect and humility, I have done more sifting than 99% of the electorate yet I am still working on my argument. Having yesterday enjoyed a walk with my 18 year old son, who like many of his generation see membership of the EU as the way forward, I am mindful my arguments still need honing. But having last night taken one of those ubiquitous quizzes, this one titled “How should I vote in the EU referendum” and getting the comment at the end: “VOTE IN JUNE: Leave at 100mph“, it is pretty clear now how I will be voting.

When I shared my quiz result on Facebook, one Green Party friend made the interesting point that an unelected EU is our protection against abuse of civil liberties by a right wing government that is elected as a result of a flawed electoral system. It is one of the many ironies and because of this issue there is more support for being in the EU than out of it by Labour than Conservative supporters, whereas in the early days it may have been much the other round, for similar reasons as my Green friend. Last night I attended a meeting (more later) when concerns were raised by some of the Christians present that a spiritual dimension is being overlooked. I must admit that in my early euro-skeptic days such arguments were more important as far as I was concerned but now less so. But even so, would the dark and sinister forces that control Europe with its anti-democratic, federalist power craving aspirations, somehow try put out the light of the gospel which has played such an important part in British life in the past, or are there other aspects to ponder?

Going back to the falsehoods being pushed by either side, I have already had a go at the government for its skewed booklet sent to every home in the country trying to persuade us to vote yes, more out of fear not based on a full consideration of the facts, on what we might happen if we were to leave. On the leave side, there is the row over the claim blazoned on the side of the Brexit campaign bus that if we did not give our £350million each week to the EU we would be able to give a good chunk of it to the NHS. The problem with that argument is that a good deal of that £350m we get back one way or another, making such a claim spurious unless it can be demonstrated that the net difference is significant. Herein lies the dilemma for humble voters – how do we know? How corrupt and wasteful if the EU? Is it as bureaucratic, unaccountable and undemocratic as the Leave campaigners would have us believe? Does the EU show its faults there is strength in unity? How do we marry up our own values and beliefs with what are the economic and other advantages (or not) of our remaining in the EU?

To their credit, one of the churches in the town, mindful of the rightness of members discharging their civic duties and a good number still to make up their minds, convened a meeting aimed at those wrestling with the above and related questions. The main speaker was one who teaches the subject. And that is what he did last night followed by a lively q&a session. I have often maintained, we do a disservice when we encourage people to come up with an opinion without knowing the facts, and why last night’s event was timely. I felt like one of his students in his a Level politics class (a good thing) and while it did not alter my opinions (or at least significantly so), it did at least provide some of the factual base (including things I didn’t know) we all need to arrive at an opinion and, while teacher did his best to remain neutral, it also helped me to be more sympathetic toward those who believe the UK’s best interests are served by continuing to play its part in the EU.

I have homework to do, and there is no shortage of material to investigate. The best video I have come across to date is one by Lord Owen, and I have been taken with those by Conservative MEP, Daniel Hannan. But I need to check out more the alternative arguments. One Facebook friend who I often disagree with made this statement that I fully support: “the reason I will vote out is because freedom is more important than an financial inducement. I believe we will be better out and if all the values that Europe espouse then vote for a party who espouses those views; don’t give the country away to an authority who claim our best interests but by their own attitudes and behaviour prove otherwise”. Other Facebook friends have waded in with alternative perspective. All of these I need to study and weigh, but in the meantime be patient: I intend as my next post in this series to give my reasons to vote out.