In line with my resolve to do some exercise every day, I did an early morning walk this morning between Southend’s Sea Life centre and Adventure Island, reflecting with a clear head, as is my habit, on events happening around me. Not taxing to be sure but better than no exercise at all and grateful I am that I am still able to do this.

While walking and enjoying on one side views of the sea and on the other the various attractions that help form Southend’s Golden Mile, mostly shut given the time of the day, I could not help but reflect on what was, is and will be. I saw one of my rough sleeper friends walking slowly and with dignity, with two heavy looking bags, one in each hand, reminding me, as if I needed reminding, that here is an unresolved issue that won’t go away. I reflected with trepidation on what could turn out to be a major development – the Seaway carpark, wondering if this is what the town needs and what is needed to further regenerate the sea front area. I remember my youth with attractions like Never Never Land and the Illuminations that had a magical draw, the Boating Lake that once was where I worked as I did at Peter Pan’s playground which, along with the Golden Hind, is now all part of Adventure Island. I also looked at the place where there was once a puppet theatre, the place I first preached as a 15 year old in my church’s open air services.

Then toward the end of my not very exerting walk, I stumbled across a plaque on the sea wall opposite “Las Vegas”: “In memory of George Wood (known as ‘Happy Harry’) who preached the gospel on this seafront from early in the 1920’s to 1963”. 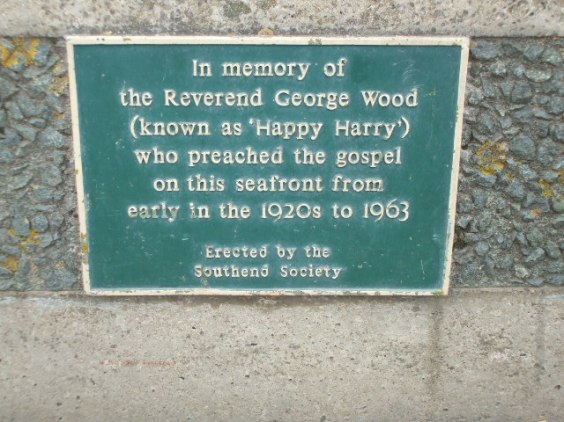 It got me thinking and when I got home I decided to Google “Happy Harry Southend on Sea”. While some useful stuff came up, there was still tantalizingly little. I did find a photo of the man though

and some blurb that went with it:  “‘Happy Harry’ c1960, the Rev. George Wood began his evangelical preaching at Southend in about 1910. Crowds of holidaymakers and locals alike would stop to listen, heckle and throw pennies. He was subject to physical abuse on occasions and retired in 1966. He died aged 86, in 1974”.

Harry’s heyday was before my time, although I seem to recall that even as a boy he was a legend and I did remember once coming across him, preaching to a crowd and as I recall thrown a pre-heated penny. It was quite a bit like the description said. I could not help but wonder what sort of man he was, what motivated him to endure such ridicule and how this related to my own early preaching career and now as I try to live out that preaching. I wonder what Harry’s legacy truly is and if we could do with some of his preaching today!

One thought on “Happy Harry”