Yesterday there was a “People’s Vote march: Hundreds of thousands attend London protest”, demanding a second referendum on the matter of the UK leaving the EU. The protestors epitomized the one reservation I had when I voted Leave in the EU Referendum. Having become so dependent on the EU and tied in to the club, do we have the will and the leaders to forge an independent existence. It seems with our current leaders the answer is no. But later realizing how flawed the EU is I am glad I voted as I did.

According to the report: “Protesters seeking a referendum on the final Brexit deal have attended a rally which organisers say was the biggest demonstration of its kind. Young voters led the People’s Vote march to London’s Parliament Square, which supporters say attracted approximately 700,000 protesters. It also had support from a number of MPs who want a fresh vote… London Mayor Mr Khan told the crowd: “What’s really important is that those that say that a public vote is undemocratic, is unpatriotic, realise that in fact, the exact opposite is the truth.”What could be more democratic, what could be more British, than trusting the judgement of the British people.”…”.

In an article by Melanie Phillips in typically defiant style: “All that matters now to save the UK: Theresa May has to go” she sets out her store: “According to the Sunday Times, Theresa May has 72 hours to save her premiership before a crucial back-bench 1922 Committee meeting on Wednesday. In my view, that should read 72 hours to save the country. Let’s cut to the chase. Forget the Irish backstop, transition extensions, the role of her chief Brexit official Oliver Robbins and all the other interminable details and lurches involved in this process. If the UK is actually to leave the EU, May has to go. If she stays as Prime Minister, it won’t. It is only now apparently dawning on her Conservative colleagues that May will not be diverted from a deal which will keep the UK tied up with the EU for the foreseeable future.”

There seems little doubt that people are divided and confused and even many among the “we can trust the government” brigade do not trust Theresa May to deliver the sort of outcome they had, perhaps rather naively, in mind when the EU Referendum result was announced, and with support from the other parties virtually non existent. I would have been tempted to side with the protestors when calling for a second referendum if I shared their motives. But they argue for remain given the botched negotiations. The question is begged – what is it a referendum on precisely? If it is on whether to accept the bad as it stands deal that will finally see the UK leave the EU, it still begs the original question: do we remain in the EU or do we leave it, maybe necessitating a third referendum to decide and also makes one wonder whether: 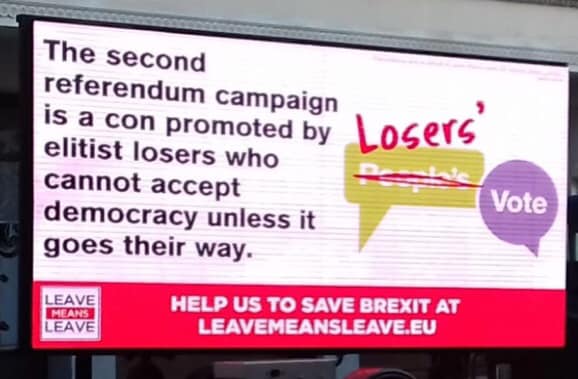 I confess to bemusement and disappointment although sadly not surprise. While a Boris Johnson or a Nigel Farage, or better still a Jacob Rees Mogg negotiating the UK exit from the EU would be better than it has been with those who have led thus far, made worse by a Labour opposition whose approach has been every bit as bad and likely worse, I can’t help dreaming what if we had a Donald Trump at the helm and imagining the sort of final deal I dreamed it might have been when we began the long and torturous path to leave the EU. But then I waken myself from the dream and recognize we are where we are. So what to do now?

One thing is to pray as I have no doubt the turmoil we are seeing has a spiritual element. While I recognize the frustration and sincerity of the marchers and who knows how many sympathizers not on the march, I disagree with them. I do feel let down by the Conservatives and Labour alike, and that is another, albeit related, issue. The main issue has always been severing our existing links with the EU, which could and should have been a straightforward process, and working on securing deals like future trading relationships. Whether a deal can be reached is another matter but at least we would have been free and regained sovereignty. Now we are in limbo, uncertain as to what will happen next. But at least we can still trust in the Lord.