Today I attended and led the funeral of my friend Andrew. What follows is the order of service and notes. 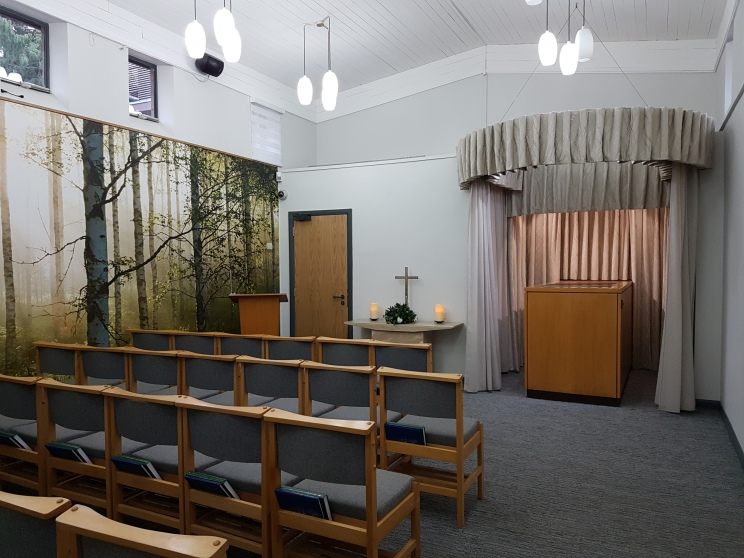 Song: “When Will I See you again ~ The Three Degrees” (family to lay a flower) (3 mins)

Committal – to include words from the Prayer Book (5 mins)

On behalf of his family, I would like to welcome you to this service when we remember Andrew Mackinnon Pattison and pay our respects. Andrew was my friend from school. We have here today members of his family: father Matthew, partner Sharon, sister Margaret and three children: Daniel, Charlotte and Olivia, together with friends who have known him over the years. All are welcome.

During the service I would like to set out some of Andrew’s life, having spoken to members of his family and will invite his son Daniel, sister Margaret and father Matthew to say a few words of tribute. After a short musical interlude and time for personal reflection, I would like to lead in a time committal.

The time we have is short so a lot will remain unsaid. However, after the service there will be a wake to which all attending today are invited. It will be at the Camelia Hotel along the Southend sea front just past Lifstan Way. If you want to make a donation it can be to the RNLI. There will be boxes at the back for this and Guivers the Funeral Directors will handle passing on donations.

I should preface my comments by saying Andrew was no saint, and his alcoholism in later years did contribute to some of the problems he and his family experienced. When one person shared recently about Andrew’s dry sense of humour, something she did not fully get, I had little doubt there are many who had that experience. He was a complex character, highly intelligent, having profound insights into the human psyche and could talk knowledgably on many subjects. He could be very funny and very kind. While today is a sad occasion, we want to focus on the many positive aspects of Andrew’s life.

Andrew was born on 7th June 1951 at Rochford Hospital – son of Matthew and Betty Mackinnon-Pattison. He was baptised at The Parish Church of St Mary’s Prittlewell on 22nd July 1951. His sister, Margaret was born 3 years later. For much of his childhood he lived at 365 Bournemouth Park Road.

Andrew attended Sunday School at Branksome Road Methodist Church for some years until he was “asked to leave”, which may have been partly due to his being distracted through boredom. He had joined the Cubs at St Luke’s Church, and later went on to Scouts at Belle Vue Baptist Church. His old Scout master Jack Norwood was in contact with Andrew a few years and remembered him fondly.

His school days started off at Bournemouth Park Infants and Juniors, then on to Wentworth High School for Boys, and in 1968 went to Southend High School for Boys. We were in the same class together at Wentworth and he became my friend, probably at the time my best friend. I don’t recall him being a particularly industrious pupil, possibly because what school offered didn’t interest him much. One of his interests at the time was amateur radio, which interest he was both creative and knowledgeable.

One thing we both did was join the Covenanter group at Coleman Street Gospel Hall (now the Potters House by the Queensway Surgery), aged around 13. I recall him getting suspended for a period for letting off stink bombs. I know because I supplied the bombs. We both persisted and became part of the church’s young people’s work. Later on he became associated with Alexander Gospel Hall (now Westcliff Free Church). He made a life long friendship with Stuart McClennand (who is here today).

I notice here to today three people who I might describe as Labour Party activists … Well, back in our teens, Andrew and me were both supporters of the Labour Party, attracted in part because of our social justice concerns, something that remained with us irrespective of politics. When we started going to the services at Coleman Street, Andrew noted two things: firstly, political activism was frowned upon by those in charge and secondly: many of its members were closet Conservatives (having made it his business to find out). When he came across one member who supported Labour, that person gained his instant respect.

1972 – he started training as a teacher at Westminster College, Oxford, where he shared rooms with Peter Ramm from Norfolk, who later became his Best Man (who is here today).

On leaving college he taught at Cecil Jones High (formerly Wentworth High) (I believe woodwork). I often wondered what his old teachers thought meeting up with him again. One of his teacher colleague friends was Majoub Ali (who is here today). He later taught at Shoebury High although had to take early retirement on health grounds. Many of his pupils thought well of him and he spent time with those less able and that were often deemed as failures. One story told (which was typical) was of a student who posted on Friends Reunited about Andrew being a good teacher – the only teacher at Shoebury school who took time for her, believed in her, and she obtained good grades – when Andrew read that comment he remembered how she had run across the school playground on the day of the results and flung her arms round him and thanked him for believing in her.

1n 1977 his mum Betty unexpectedly died. Not long after his dad remarried and moved away. While after Andrew’s mum’s death, he, Margaret and dad went their separate ways, they remained close and we see the evidence of this today.

Andrew married Cathy in 1979 and had three children: Daniel, Charlotte and Olivia. While they remained fond of each other, the marriage ended in divorce. Andrew was devastated when later she died.

While no doubt there were sad memories, there were happy ones too. Olivia remembered as a wayward teenager her dad sorting things out with the police with empathy and style. Leo, Olivia’s husband, remembers Andrew crying when he asked Andrew for his daughter’s hand in marriage. Charlotte remembers some amazing craftsmanship when Andrew made a craft item for her to take to guides. When I last met Andrew, I recall a deep, philosophical conversation about the Middle East and the evident pride and concern he had for Daniel, who was serving in the army in the region at the time.

Andrew was not a well person in his later years and for the last 2-3 years was unable to go out of the house, unless to the hospital and only if he was assisted. After he and Cathy separated, he lived with Sharon, who became his soul mate and carer. Andrew really appreciated this and members of his family want to pay tribute to the amazing companionship and fantastic care she gave Andrew in those years.

After college, Andrew and I drifted apart, as is often the case, but I do remember three meetings with him after that. Around 1977, I met him in the Golden Goblet (now a MacDonalds) opposite Cecil Jones. I recall we ended falling out over something minor, not to meet up again for another 25 years. But I recall him telling me that while he disapproved of me at the time, he liked my dad and it made me realize the sort of people Andrew did like (I have already mentioned Peter Ramm, Stuart McClenand and Majoub Ali). They are a select band to who Andrew was loyal and the feeling was reciprocated. I can’t resist mentioning Anton Campbell, an elderly, austere Scottish banker gentleman, an elder at Coleman Street, seen by some as a typical establishment type, yet when we last met, I think around 5 years ago, Andrew spoke ever so highly off. I think Mr. Campbell saw potential in Andrew and Andrew responded. The other time I recall meeting was around 2003 when Andrew dropped into the Growing Together gardens together with the computer class he taught. I was working there at the time. In his early retirement he chose to teach IT at the Queensway Activity Centre, as a volunteer. The empathy and rapport he had with folk from that class, some with mental health and addiction issues, was very evident.

I hope I have got it right. I would love to say a lot more but time doesn’t allow but I will hand over to Daniel (his son) and Matthew (his dad) to say just a few words…

We now come to the part of the service when we say goodbye to Andrew. I have no doubt if 50 years ago, when we chatted daily about all sorts of things, he would have found the prospect quite hilarious that I would be taking his funeral service today and wishing I had asked him what I should say. In his later years, religion appeared not to play a part in Andrew’s life but if did in his earlier life. We know that he was a regular for some time both at Coleman Street and Alexander Gospel Halls and had been sent to Sunday School. On 6th July 1966 Andrew went forward at a Billy Graham crusade when Billy invited folk who had decided to follow Christ (I know because I was there). Only God and Andrew know why he did so and how he regarded faith thereafter. Andrew was born two weeks before me. I am at an age when I attend many funerals knowing the next one could be my own. Some are conducted on humanist lines, taking the view that death is the end but comfort in that something of the deceased lives on in those left behind and are yet to be born. Others see death as a prelude to life yet to come and because of that I would like to close with some words from the Prayer Book that starkly sets out what this is about …

“Man that is born of a woman hath but a short time to live, and is full of misery. He cometh up, and is cut down, like a flower; he fleeth as it were a shadow, and never continueth in one stay. In the midst of life we are in death: of whom may we seek for succour, but of thee, O Lord … Thou knowest, Lord, the secrets of our hearts; shut not thy merciful ears to our prayer; but spare us, Lord most holy, O God most mighty, O holy and merciful Saviour, thou most worthy Judge … Forasmuch as it hath pleased Almighty God of his great mercy to take unto himself the soul of our dear brother Andrew MacKinnon Pattison here departed: we therefore commit his body to the ground; earth to earth, ashes to ashes, dust to dust; in sure and certain hope of the Resurrection to eternal life, through our Lord Jesus Christ; who shall change our vile body, that it may be like unto his glorious body, according to the mighty working, whereby he is able to subdue all things to himself”.