So Trump has triumphed, but this is not a time for Tr(i)umphalsim.

Reading through my Facebook feeds, it is quite evident that the majority of my friends find the thought of a Trump presidency disturbing to say the least. Just as with Brexit back in June, Trump defied all odds by winning the votes he needed to become President. I would say the consternation felt by many this side of the Pond, including among Christians who share many of my religious views (as well as by half those on the other side), exceeded that regarding the Brexit result, and as then I am in a minority among friends. 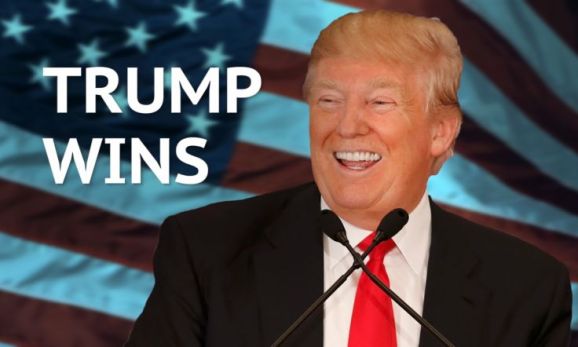 In the case of Brexit, the result is what I wanted but didn’t expect. In the case of Trump, while I found when considering Trump too many character flaws glaring me in the face, cropping up, right up to Election day, I wanted a Clinton victory even less, but unlike in the case of Brexit, I went to bed early last night, half expecting to wake up to a Trump victory. I sense there was a mood in the country yearning change, to give a suspect establishment a bloody nose, and dissatisfied with how they see the country going, wanting to be heard, fed up by the empty words being fed to them by the Clinton camp. Ironically, a similar mood prevailed eight years ago, when people voted for someone ideologically opposed to Trump, one Barack Obama. As is invariably the case, the lesson one might derive is not to put one’s trust in “princes”, like Obama and Trump. I woke at 2am and the writing was already on the wall, and so it turned out.

I have little doubt that reactions and comments from around the world, by all and sundry, will be coming in thick and fast, and as for myself, I wish to take some of this in and return to the subject at the weekend and further share my thoughts. As it is, it has been a long haul blogger wise, starting with my seeing in Trump a no hoper that didn’t deserve to be President (e.g. see here). This culminated in my fifth “personal perspective” blog a week ago, in which, while not endorsing Trump and putting aside personalities, I set out ten reasons why I preferred him over Clinton, and my feelings now are pretty much the same as they have been for a while. Unlike Obama, Trump has the luxury of being able to count on support by both Congress and the Senate to carry forward his ideas to make America great again, when he takes over on January 20th, providing of course he doesn’t do anything too outrageous, as his detractors fear might well happen.It will be interesting to see to what extent he will “drain the swamp” and shake up what is a powerful political class. I for one, among many, look forward to seeing his Supreme Court appointees.

There is so much I could write about concerning the events in the past 12 hours, and it is difficult to know where to start. While victory speeches are often cheap and it is easy to be magnanimous if you are a winner, I did feel Trump’s almost gracious words regarding his opponent (in the light of the mutual vitriol I have not witnessed to the same extent before that), his commitment to heal the nation that he sees as divided and work for and with those who had opposed him in order to make America a great country, struck a chord. The proof of the pudding as they say … There is no doubt the American people have spoken and, whatever one’s misgivings are, that decision needs to be respected, yet holding Mr. Trump to account.

One of my disappointed Christian friends commented that Trump’s victory could hasten the Lord’s return. Theologically, one is on slippery ground by making any such predictions. However, a Trump victory, with its prospect of shaking up American society, the Establishment and events on the world stage, is something to look forward to, but not necessarily with fear and trepidation, for God is on the throne and Trump and other leaders will have to bow their knees to Him. Given the noises Trump has made about giving more religious freedom and encouraging Christians to not just be free to worship but to take a full part in public life without shackling, I see this as a fantastic opportunity for them to be active in serving the poor and oppressed, the marginalized and disposed, seek after truth, justice and righteousness and to preach the gospel of the grace of God. I hope and believe this may be their finest hour.

When I went to bed last night, I prayed in advance for forgiveness for wanting a Trump as opposed to Clinton victory. I realized then, as I do now, my preferences are neither here nor there, and it is in God’s hands. Whoever leads America needs all the help he can get, whatever our misgivings. If it had been a Clinton victory, I would still have needed to try to view matters from God’s perspective, not my own. I truly sympathise with my friends who do not share my optimism. This is the time to rub in balm, rather than salt into the wounds. We are living in extraordinary times in a runaway world. It is easy to lose heart (one reason for my oft depression), but we must have hope and look to make a difference, otherwise we are lost.

I want to echo the words of the Hebrew prophet, Samuel: “Moreover as for me, God forbid that I should sin against the LORD in ceasing to pray for you: but I will teach you the good and the right way” as these seem apt. What I must do more is to watch and pray, and be the salt and light Jesus taught, looking forward to His coming.